The 7 wood club rose to prominence because of its applications when hitting the ball long. It makes it easier to hit the ball and makes sure the ball doesn’t roll too much after landing. Due to its extra loft, golfers also get a higher margin for error.

This type of golf club competes with the 3 iron and 3 hybrid clubs due to a similar loft angle. It is preferred over the others because golfers find it more convenient to hit as compared to longer iron clubs. It can be used on short par 5s and for tight tee shots.

If you are in the market for a 7 wood club, we have shortlisted 3 of the best options you will find. 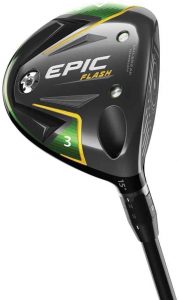 Let’s kick off our list with the Epic Flash Fairway Wood Club by Callaway. The most impressive thing about it is that it has been made after extensive use of AI, which has resulted in the creation of the Flash Face technology. It helps golfers get more ball speed and distance. This happens because the new face design aids in speeding the ball for on-center as well as off-center hits.

The face is incredibly strong as it is made from forged titanium which has been welded on the head with a laser. The laser is also used in etching the face of the club with patterns to result in greater maneuverability of the ball.

The head of the club has incorporated the Jailbreak Technology, which stiffens the body by using the two internal bars. This results in maximum speed as most of the impact is on the face of the ball. Thus, it makes playing certain shots like draws and fades easier. The carbon crown is shorter and lighter, and the repositioned mass is used to give the ball a much more controlled and longer flight.

The club has three shaft options depending on the need for more stability in the shot, greater energy in the shot or enhancing the playability of the club. 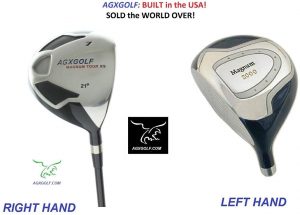 Next on our list is the Men’s Magnum Utility Fairway Wood made by AGXGOLF in the state of Michigan in USA. These clubs are particularly popular among the senior golfers out there. This is due to the fact that the driver on these clubs is larger and, therefore, has a bigger sweet spot. The driver has also been designed in a way which reduces air drag.

Due to this larger driver, playing a shot is more convenient even when compared to 2, 3 and 4 irons. Furthermore, it offers more distance and a greater margin for error on uneven shots, even in rough conditions. In golfing terms, this makes the club ideal for lay-up tee shots and for longer par 3s while securing a softer landing for the ball. This is all in addition to a low center of gravity so that you can get under the ball properly while playing the shot.

Moreover, this wood has a higher loft and shaft, which is made out of a combination of graphite and carbon. The carbon used makes the shaft considerably lighter, making it easier to play. These facts ensure that the ball gets more distance and speed with less effort.

It comes in several size options depending on the height of the golfer, ranging from 5 foot 2 inches all the way to 6 foot 8 inches. The club also comes with a custom head cover at no extra cost to the buyer.

Rounding up our list is the 2018 Women's Kalea Ultralite Fairway Wood by TaylorMade. It has been designed keeping the need of women golfers in mind. To specifically target such golfers, the club has been designed with state-of-the-art technology that will help them get the best out of their physique. It helps improve not only confidence but also experience.

The Kalea Ultralite will turn out to be an essential part of your golfing gear due to TaylorMade’s engineering and optimization of the core aspects of the game such as distance and trajectory. It maximizes the power output in each swing by making use of the Speed Pocket technology.

This also aids in the balls getting an optimal spin rate and a high launch angle, which means more distance is travelled at a higher speed. The wood also has a low center of mass and an optimized loft for easy and efficient power transfer to the ball to maximize the distance travelled.

The shaft is made up of a light graphite and uses the Ultralite technology. This ensures prolonged ball flight and makes it easier to get the ball in the air. Compared to market competitors, the shaft of the Kalea Ultralite is much more flexible and forgiving on mishits. The head is also shaped aerodynamically to get the most distance out of each shot.