A golf ball is to a golfer what bullet is to a shooter. But unlike the shooter who is pretty much stuck with the bullet determined by the weapon, a golfer has the freedom to choose his preferred golf ball. And swinging with the right ball is half the game conquered.

In this comprehensive review, we dig deep into some of the best golf ball for 100 mph swing speed. 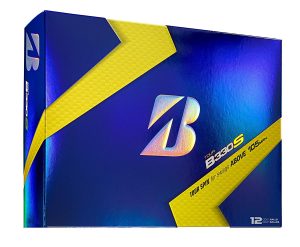 This ball from Bridgestone is the first one on our list and for a good reason. It is a premium golf ball which loves speed of 105 mph and above and lands with precision. When word got out that Tiger Woods made his return on the grass with the Tour B330 S, I knew I had to take it for a spin.

Before you even start playing, the first thing that strikes you about this golf ball is its dual dimple design. At first glance, it can be ignored, but when you hold it in your hands, you can clearly see and feel the interesting pattern. It features a mini dimple within the traditional dimple design of a golf ball. This new design is what gives this ball an edge.

The core of the Tour B330 S is said to be 6% larger than conventional golf balls. The softness from the core to the exterior incorporates a steeper gradient as well. The cover of the ball utilizes proprietary Seamless Cover Technology, as well as the SlipRes, cover which renders the Tour B330 S with the highest friction coefficient. The urethane cover is also a nice touch to the ball.

Irrespective of the fancy technology and design, the heart of any equipment is its performance, and the Tour B330 S does not disappoint. You will love the speed at which this ball takes off from the tee. This outstanding feature did not deteriorate during a breezy and cold morning.

The contact with the putter is rather substantial and impressive. But it was hardly any surprise as the brand has claimed this ball is their softest and best performing yet. It maintains a subtle sound on contact and the spin controlled.

However, the ingenuity of this ball I loved is the dual dimple design. It reduces drag considerably and allows you to have more distance control. We also loved the trajectory of the ball, which was a lot higher than anticipated.

In terms of design and performance, the Tour B330 S is faultless. Perhaps the only contention with it is the rather steep price, and that too if I am being particularly petty. At $45 for dozen, it is not the most affordable golf ball on the market.

Another thing about the Tour B330 S is that it is not available outside the United States. Although it is not a feature strictly related to the ball, it can be negative in some areas. 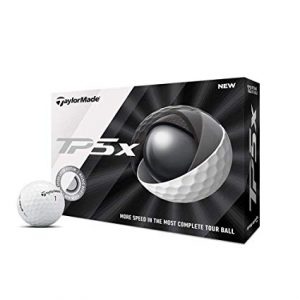 Anyone worth his salt in golf knows that TaylorMade is a very reputable company. They have had consistent delivery in their products. When the TP5x came on the scene, it was celebrated by amateurs and endorsed by the biggest names in the game. I couldn’t wait to take this premium golf ball out for testing.

Like its TP5 predecessors, the TP5x follows a similar design, especially in the outer areas. With a 332 dimple cover and a urethane cast, it features a semi-rigid cover. The brand has claimed that the TP5x has a compression higher than all others in the range and I believe it’s true.

The technology in the core, although we cannot see it, has undergone an upgrade which is much appreciated. You will love the combination of Tri-Fast Core between the 2nd and 3rd layer as well as the High-Flex Material, which will translate during its performance. A cross-section of the TP5x also shows that the 4th layer of the core is stiffer by as much as 30% which adds to the ball’s longevity. Surprisingly, the TP5x made in 2019 are much more durable than those made in 2017.

The TP5x is by every degree a tour-level golf ball. Hitting the ball, I was surprised that it has a softer feel than others in the TP5 range. But this was an advantage which I later appreciated. The soft feel translated into better interaction with the grooves of the club. This had a slightly lower spin, but it was exceptional and allows you to have maximum control over the ball.

The inclusion of the High-Flex Material, as well as the improved core, adds a springy rebound to the TP5x. This ball has a significantly higher trajectory even in the wind, but it is impressively steady. It is as reactive a ball as you would expect from a premium golf ball.

Earlier there have been instances of players switching back to TP5 as the TP5x failed to deliver the required spin, especially for longer distances. But the new TP5x has been engineered to solve this problem. I think it is down to the technology of the core as well as the semi-rigid cover which accelerates this improvement which is great.

The Bad – What I didn’t like about the TP5x.

There isn’t much to hate about the TP5x. But I didn’t quite experience the larger distance gain I was hoping to get. It was a tad bit disappointing, to say the least. But on the other hand, observing the performance of other players in the fitting center, it looks like the launching conditions of the player affects this aspect, so I still have hope. 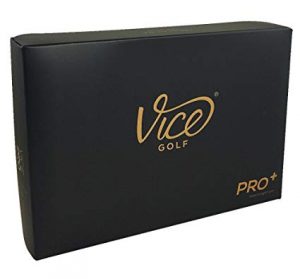 The Vice Pro Plus is an upgrade of the Vice Pro. Unlike the other two balls on our list, which are quite pricey, the Pro Plus is a budget-friendly ball without compromising the performance or its excellence in design. Let’s look deeper.

The Vice Pro Plus features an identical design to the Pro which is the premium urethane cover. But when you feel the ball in your hands, the Pro Plus definitely has a firmer feel than its predecessor. I must add this takes a little getting used to.

With 336 dimples and a special coating of BJ13 on its cover, the Pro Plus is a classic ball from Vice. The coating keeps the balls looking whiter for longer if you care about the aesthetics of your golf equipment. As it is a 4 piece model, the fourth layer is what affects the overall performance in a significant way. In a positive way, of course.

The Vice Pro Plus performs like a champ, especially for long-distance hitters. It is a tad softer than others in the series, which is evident when you hit the ball, and it leaves the putt almost silently. It is firm yet soft, and this allows more traction with the club. Despite the rather thin feel of the cover, the Pro Plus is also very durable as well.

The spin on the ball is on the average side, which can either be a negative or a positive depending on the style and speed of your swing. However, compared to other balls from Vice, the Pro Plus have a slightly lower compression. I personally did not have a problem making it achieve the distance and velocity I wanted. But beginners might have a little more time adapting their swing speed and power to accomplish the preferred distance.

The Pro Plus is very stable, and the landing is almost perfect as well. I am told that this is due to the addition of a new technology called the S2TG in the ball, which gives it excellent stability even in the wind. The trajectory of the Pro Plus is on the lower side, which is a thing to consider if you like your balls to fly high.

The Good – What I like about the Vice Pro Plus.

The Bad – What I didn’t like about the Vice Pro Plus.

The only thing of contention is the lower compression on the ball. Personally, I didn’t have a problem with it but if I were to speak on behalf of the average Joes, it is a little tricky.

If I had to pick one from this list of the best golf ball for 100 mph swing speed, it would be Bridgestone Tour B330 S., and it is not just because it is Mr. Woods preferred ball. The speed, traction with the club and the overall performance is unmatched. The stability in the wind as well the relatively higher compression which aids its speed makes it edge over the other two ever so slightly.

If you are on a budget, the Vice Pro Plus is a serious contender. It performs on par with premium golf balls which costs double its price. The control over the ball, the stability and the precision of landing is worthy of applause. The only thing you might want to be aware of is that the Pro Plus sells out like hotcakes. It is almost always out of stock which is a testament to its popularity.

Using the right pieces of equipment in a game is paramount. Although winning a game is wondrous in itself, sometimes playing with the right golf ball is all it takes to feel that you played your best game. And at the end of the day, it is all that matters.